Madeline is in Los Angeles for her friend's sister's funeral, having gotten up before dawn to take a shuttle to BWI. So it is quiet around here, though I am still having a busy week because tomorrow we're taking the afternoon and evening to go to gardens in Pennsylvania. My desktop hard drive is almost full -- it wouldn't let me run half my programs this morning -- so I did a lot of file rearranging. It was unseasonably warm, so we went to Great Falls to see the changing leaves and herons: 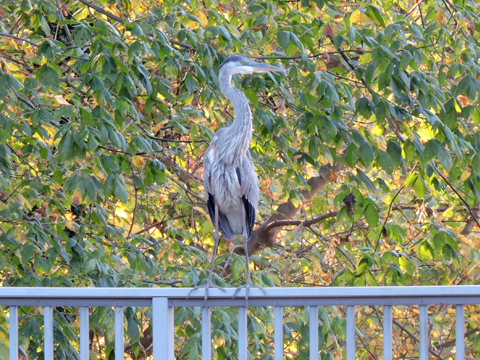 We stopped at the Bethesda Co-op on the way home to get wine and noodles so we could have Thai food for dinner. We watched this week's Blindspot, which the network said would be less violent this season since it's on earlier but it's been quite violent so far, and then we caught up on Versailles because if I'm going to look at a selfish, vicious, womanizing tyrant with delusions of godhood on my television, it's not going to be in a presidential debate. We caught the end of the Cubs win!
Collapse