At midday Saturday, it was nearly 70 degrees, but by 5 p.m. it had dropped over 20 degrees and there were some flurries in the air. We dropped off Maddy at work after lunch and picked up Alice on the way to Reston Town Center, where we went to the Greater Reston Arts Center for the final day of Shih Chieh Huang's Synthetic Transformations, which is like a psychedelic underwater collection of jellyfish and squid. We also saw the Patrick Dougherty installation.

Then we went to ArtInsights, which I've wanted to visit for two reasons: the Harry Potter and Star Wars original concept art and the fact that it's co-run by Leslie Combemale, with whom I went to theater camp in the very early 1980s (we have friends in common but I hadn't seen her since then)! We took Alice home, stopped in briefly to say hi to Jeremy and Avery, came home for dinner, and went back to Virginia to get Daniel from Dulles, so he is here for Thanksgiving week! 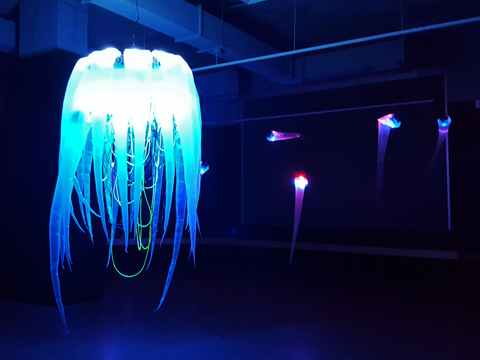