It was even warmer on Wednesday than on Tuesday, though it rained the entire day, quite hard at times. I took Maddy to a couple of appointments (one of which was a big disappointment, as she can't dye her hair the way she wanted for a week, though she got a wig to hide her illicit pink roots at work). In between, I watched the Voyager episode I'm reviewing this week, did a stack of laundry consisting pretty much entirely of towels that had vanished into someone's room, and had a huge fight with my computer which decided that I wasn't allowed to connect to the internet for half an hour.

While Maddy was at work, Paul and I went to BGR for the last night of our free burger coupon, where I ate too much excellent veggie burger with spicy cheese -- and on the way home I caught a Ditto pretending to be a Pidgey, w00t! We watched the Arrow crossover episode, though it was too much Arrow and too little everyone else for my taste, then we caught up on Agents of SHIELD, which is actually good this season, and Designated Survivor, which is getting too preachy and hyperbolic for me. Butterflies from the exhibit in the conservatory at Lewis Ginter Botanical Garden last summer: 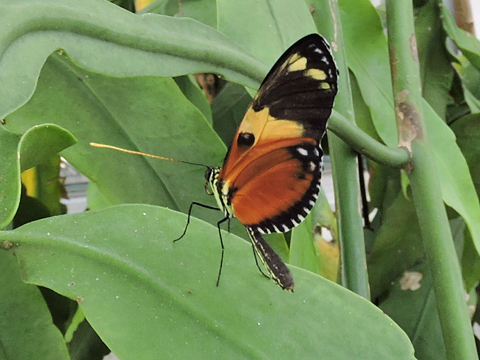