It rained all day Tuesday, from the time I woke up through the time I'm typing this. I went out in the morning to drop Maddy off at an appointment, then went out again just before lunch to retrieve her, and after lunch, Paul and I went to the MVA satellite office so he could get the van emissions checked and I could get my driver's license renewed. I wanted to stop at a park over in that direction, but it was raining too hard to walk anywhere, so I settled for driving through the Cabin John Park parking lot to catch the Charmander there.

Angela came over late in the afternoon for a movie and dinner; we watched The Devil Wears Prada because she had never seen it (I liked it much better on this second viewing), and we ordered Domino's so we wouldn't have to go out and get food in the rain. After she went home, we watched The Flash, on which at this point I can't keep either timelines or parallel earths straight, and Agents of SHIELD, where I just can't keep character arcs straight. Here is the music room at Longwood Gardens decorated for this Christmas: 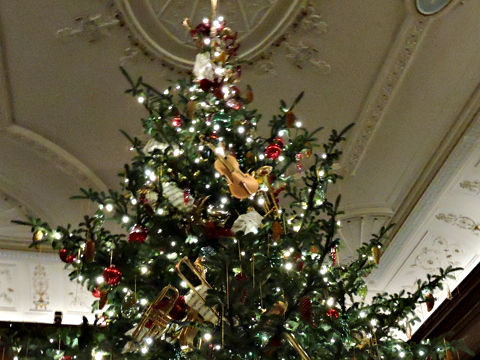