I had an eye doctor appointment on Wednesday morning that lasted an insane amount of time, mostly because I need new glasses (only marginally, but since we have no idea what will happen to our insurance a year from now, I want to get them while I have a good vision plan) and I tried on a ridiculous number and took a really long time deciding what I really wanted (conclusion: not the ones that are the cutest, but the ones that give me the widest progressive field of vision, meaning bigger lenses than my face probably needs but hopefully means no headaches from craning my neck at weird angles ever again.

The rest of my day was not exciting, except that -- after stopping at Wootton's Mill Park on the way home to see whether one could really catch Kabutos there (I only found one) -- I caught several Charmeleons at Cabin John Park during a trip to drop Maddy off at work and now I have evolved a Charizard. We watched Hairspray Live, which I enjoyed but I have to admit that no version of the musical comes close for me to the 1988 non-musical film with Divine, Debbie Harry, Sonny Bono, and so many other fantastic performances. Here are some of the lighted conservatory spaces at Longwood Gardens over the past weekend: 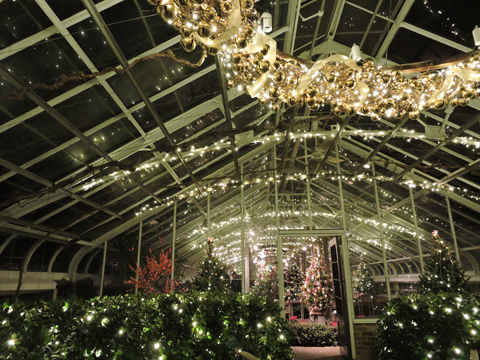