We had much better weather on Sunday than on Saturday -- it was in the 60s in the morning, though it dropped throughout the afternoon -- but I didn't get out much because I was still working on setting up the computer my father gave me -- I forgot how long that process can take, especially synchronizing files! I had lots of help from cats as I rearranged my desk; the new screen is narrower but wider, so it required moving a lot of things around.

In the afternoon while I worked, we watched the Ravens game, went food shopping since both kids are coming next week, stopped briefly at the park, and came home for most of the Patriots game. Madam Secretary and Elementary were both delayed for sports but we watched them while I caught up on all the email and stuff I missed shuttling between computers. Maddy is safely in L.A., and here are some photos from Lewis Ginter Botanical Garden's holiday lights: 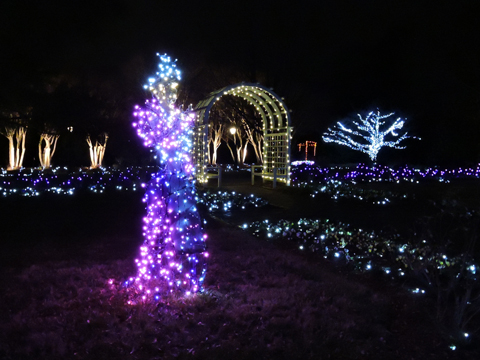