We had sleet and snow forecast, so we all slept late, only to wake up and discover that it was merely raining and not even all that cold. We had eggs, veggie bacon, and pecan pancakes for brunch, did various chores, and eventually all took Maddy to work at the very crowded mall, where Paul, Adam, and I remained so we could meet my parents and go see Hidden Figures.

What a joy! It's fantastic -- wonderful acting, lots of humor, nods to the developing civil rights movement without it taking over the women's stories as individuals. Structurally it's a pretty straight-up historical drama, which tends to get overshadowed by Hollywoodesque stuff during awards season unless it's about European royalty, but it's really nicely done.

We were full from popcorn, so we came home afterward and had peanut butter sandwiches eventually for dinner. Having seen the end of the Falcons game, we turned off the middle of the Patriots game to watch Cowboys and Aliens, which we'd only seen once before; it's mediocre yet better than its reputation. From the C&O Canal last April, because I miss them: 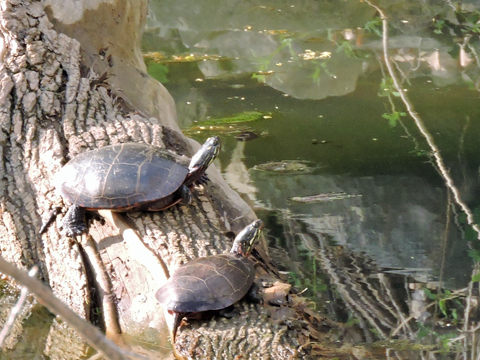