I spent most of Tuesday with Maddy, which was very nice -- she had an appointment in the morning to which she needed a ride, then we came home for lunch, then we went to A.C. Moore and Michael's for craft items she wanted to make gifts for people (and I may or may not have bought a $5 pair of fuzzy slippers). We tried to get Moose Munch at Bath & Body Works but they were sadly sold out.

When we came home I did some stuff on Shutterfly and colored my hair while Paul made peanut soup, yay! After dinner we watched the first episode of The Young Pope, which is absolutely insane, I think in a good way but it's too soon to be sure! Then we watched Agents of SHIELD, which can drop the Ex Machina rip-off any time now. From the Jurassic World exhibit at the Franklin Institute: 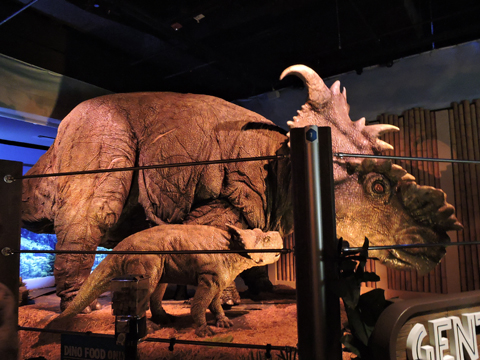