I had a pretty nice day: snuggly cats, shopping with Maddy, dinner at Pasha Land with Paul, Karen, Angela, and others. But I am very cranky, not only because of the Terrible Thing tomorrow, but because it'll be the first Friday in longer than I can remember that I don't need to post a Star Trek review. Who'd ever have thought I'd be sad not to have to rewatch fifth season Voyager?

After dinner we went to see Fences, which was probably not the best choice as it's quite depressing, though extremely well acted. Since Mar-a-Lago is now "the winter White House" according to the impostor in chief, I doubt I'll be in any mood to visit Hillwood for the next four years, so here are some photos from a previous visit of Marjorie Merriweather Post's dresses displayed in her rooms. 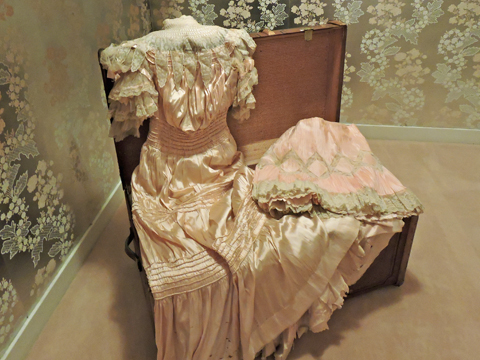