I had a fairly low-key Sunday with family, which started on the late side as I did not see either Adam or Maddy till nearly noon when the latter had to get up to go to work, so I spent the morning looking at glorious photos from yesterday's marches around the world. While Maddy was at the movie theater, the rest of us went to take a walk at the C&O Canal, where it was drizzling but not very cold and we saw lots of ducks. Afterward we stopped at the Bethesda Co-op for some food and went to retrieve Maddy. 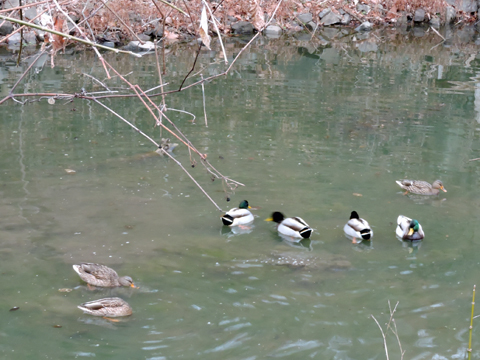 
My parents came over for pizza and the Packers game, though the Falcons won it. We had cupcakes for dessert, then they went home for the Patriots game while we took Adam to College Park, where he has work the next two days and starts spring classes on Wednesday. Since it was obvious that New England was going to win, we watched this week's Victoria, then Secrets of the Six Wives, and the former reminded me more of The Tudors in its levels of absurdity than the latter!
Collapse