Cheryl and I had a nice relaxing Monday ignoring the world! (Well, she did have to deal with driving to DC in the rain and wind, but after that!) We went out to get Lebanese Taverna, then we came home and ate it while watching this season finale of The Crown, and then we went to see Hidden Figures, which was just as awesome the second time. It's a nearly perfect film -- it may not have the indie vibe of Moonlight, but it has superb lead actors and even the minor characters are well developed, not just advancing the story. Plus it has lots of humor among the drama.

Since it was a rainy day, we decided we might as well do a double-header, so we also saw Silence. It's very well-acted, but I didn't love it. You'd think a movie set in Japan could present a single Japanese individual who's both admirable and a fully developed person rather than a plot device to inspire white priests. You'd also think that a movie with a Buddhist Inquisitor could make some single mention of the Catholic Church's history of both Inquisition and ignoring the rights of indigenous peoples in the places priests proselytized during the epoch of this film.

It was already dark when Cheryl went home, at which time we took Maddy to the mall to meet up with friends and came home ourselves for Supergirl (not bad, but I still miss Cat so much) and Timeless (pretty good, often a little preachy, could also use more humor). Now we're watching The Daily Show, which is subjecting me to more of the inauguration than I saw during or after it happened thus far, and the kittens are fighting for couch and lap space by aggressively grooming each other. Randomly, here are some photos from last fall of birds at the National Zoo, resident and visitors: 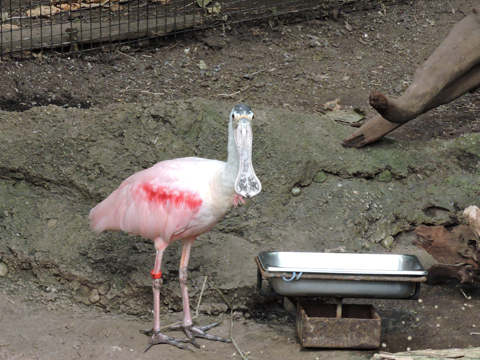