It was 60 degrees on Wednesday! Nice enough that a walk in the park was practically required, so we went, though everything is very brown at this time of year. I also had a neighbor loan me a screener of Loving, so we watched that while doing computer chores -- superb performances, lots of emotion -- there's no big speech like Katherine Goble's in Hidden Figures, the focus is less on the legal arguments than the excruciating treatment of people who just wanted to live as a family.

Maddy did not have work, so she came with us to the food store and worked on homework. After dinner she watched the new episode of The Magicians while we caught up on The Young Pope, which remains very crazy (and probably super-offensive to religious Catholics, but as an outsider, it's a really interesting look at what happens when an ordinary guy receives the ability to speak infallibly). Here are some of Chihuly's baskets and macchia from Chihuly Garden and Glass in Seattle: 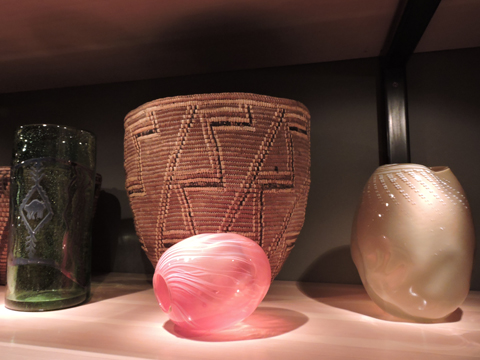