I feel like every night by the time I get to LiveJournal I'm too upset to post substantively about that day's dissolution of the United States I recognize in our insanely swift slide into fascism while the rest of his political party either cowers or focuses solely on their own far-right agenda, and I'm also too stressed to say anything meaningful about anything else. I would so much rather be happy that the Boy Scouts have finally started allowing transgender scouts, though then I start thinking about all the people on the far left I know who voted for Stein on the grounds that incrementalism is useless and Clinton represented incremental change rather than big change, and I think about how in a decade the Boy Scouts have gone from no gay scouts to just no gay scout leaders to accepting gays but not transgender boys to this, and I want to punch the "if I can't have everything perfect right this very moment then FUCK EVERYBODY TRUMP MIGHT AS WELL BE PRESIDENT" people in the face.

Ugh. I've written letters and made phone calls and had many conversations about the horror of the Obamacare repeal and the return of the pipelines and the cabinet appointments one of which is worse than the next (if I could only block one, which is more important, a Secretary of State not in the oil lobby's pocket or a Secretary of Education who's at least educated about how schools work?) but this week all I can think about is the appointment of a fascist to the NSC, thus giving him and Trump the power to arrest or assassinate anyone they want to label an enemy of the United States, whether or not that person is a citizen, without needing any authorization beforehand and with no culpability after the fact -- a white supremacist who hates Jews and supports men who believe women exist to serve and service them -- while the president, who has already filed to run in the next election, can essentially take bribes now and call them campaign donations, including one from a Russian oil company.

Yeah, my mood is not good. This is in part because Maddy got stuck at work till after 2 a.m. yesterday because of a crisis there and we couldn't get her on the phone to make sure that she was, in fact, still at the theater, so we were up very late to make sure she was okay. So I slept late while our dusting of snow melted and got behind on everything, which is going to be a trend this week because I have lots of appointments. I had two big laundries to fold so at least I had an excuse to catch up on Madam Secretary (always enjoyable) and Victoria (still ten degrees west of history), and in the evening we watched the new Supergirl (which was all about the boys who want to be superheroes and was painfully boring) and Timeless (for the most part, the same). Here are some photos from the Hugh Mercer Apothecary in Fredericksburg yesterday, where an apprentice explained potions I mean treatment ingredients and a nurse demonstrated the use of leeches and scalpels in bleeding: 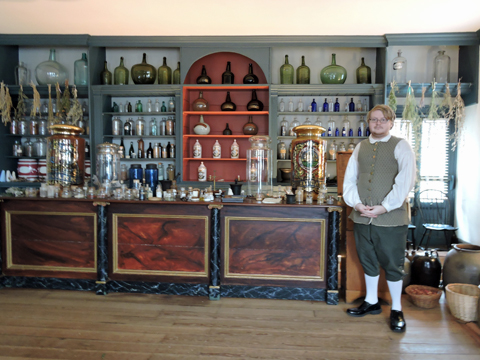