We're home after driving Adam to College Park and saying goodbye to Christine at home following the most ridiculous Super Bowl ending in history -- I was rooting for Atlanta, but even if I'd been a Brady apologist, excuse me, fan, I'd be pissed as hell that a coin toss predetermined the outcome. Overtime rules are some epic B.S. Before that obnoxious ending, it was, at least, reasonably interesting to watch, since it was a more defensive game than I expected and Atlanta had some great plays.

Earlier it was a pretty good day; we picked Adam up in College Park and saw Nocturnal Animals with him (yet another acclaimed movie I did not feel was All That, and to give La La Land and Manchester by the Sea a break, at least they aren't obsessed with misogynistic masculinity despite ostensibly following a woman's experiences). The Super Bowl party my friends throw, where my parents and Maddy joined us, is always a joy, so here are the annual shoe, pet, and high school reunion photos! 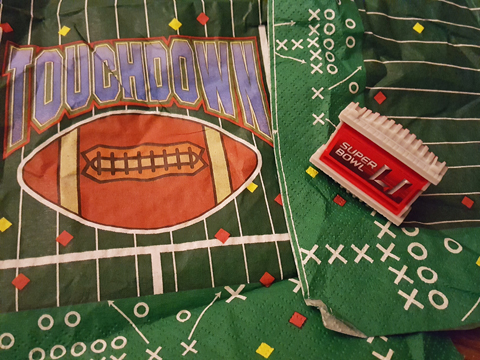