I had a lot of chores to do on Friday so this won't be an exciting entry. It was Paul's last day of work at the place he's been for the past twenty years -- well, technically the last day is on Sunday, but since the office is closed between now, the people taking over the work in India had better know how to fix any long distance crises by now -- so he went to drop off his laptop and blackberry. When we dropped Maddy off at work, we left the car to get one of the tires fixed, since it had lost pressure for the third time in two weeks. The puncture wasn't large but because of the location it had to be replaced.

We had dinner with my parents, who had Valentine presents for us but I forgot our Valentine presents for them. Then we came home and caught up on Blindspot, whose conspiracy this season is not making a lot of sense; I miss when it was family drama and clues from tattoos and less convoluted conspiracy centered on Weller. Now we're watching ninth season Bones, where I would be willing to forgive the increasingly gross corpses but the Pelant crap will not die and that's more annoying. Here are some photos from Great Falls last month when the vultures and geese were out in greater numbers than the tourists: 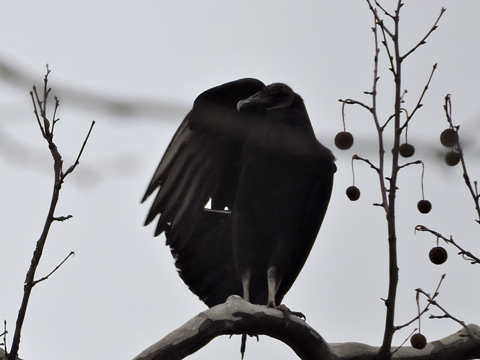