We woke Tuesday to snow, though not nearly as much as we were threatened with when we went to bed Monday night -- maybe two inches, though it was already melting by the time we were downstairs. The good news for us is that the storm tracked north, though I hear from people in New York that this was not such good news for them. We were able to get out in the early afternoon and drove around a bit to see the neighborhood, though the park was closed so we couldn't walk there. Because it was Pi Day, we picked up pizza for dinner.

Since we were mostly stuck indoors, we decided it might as well be a Ewan McGregor afternoon, so we watched the DVD of the IMAX documentary Humpback Whales, which was terrific. In the evening we watched The Flash -- how come a sentient Speed Force doesn't annoy me as much as angry talking gorillas? -- then the Ewan McGregor-Jennifer Connelly-Dakota Fanning movie American Pastoral, which was very well acted but exceptionally strange both psychologically and politically. 24 hour snow photos, including before-and-after daffodils: 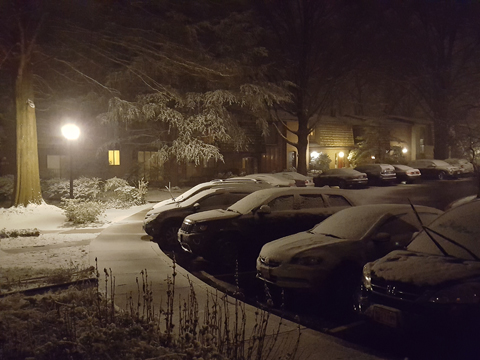