We had a slow morning, as both Adam and Maddy slept till after noon, which I foolishly spent doing laundry instead of making my free one-day special Shutterfly magnets that I worked on tonight so I'm very behind on social media! Once everyone was awake, we had sandwiches, took Maddy to work, and went to Brookside Gardens for its orchid show and the water paths. The cherry blossoms that were opening earlier this month have all turned brown and the daffodils are drooping, but there are still lots of flowers in the conservatory. 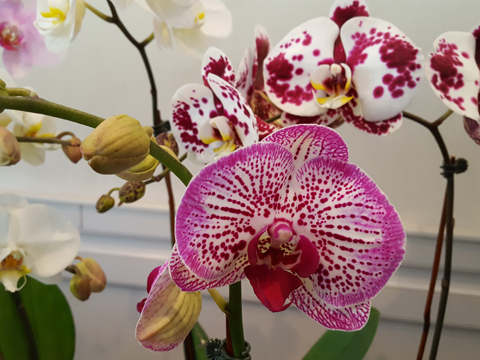 We came home to the news that Wisconsin had defeated Villanova, which is fine with all of us -- my sister was a Badger -- and watched most of the Northwestern-Gonzaga game, which Gonzaga may have won but they were upstaged by 1) bad officiating and 2) Northwestern Crying Boy. I can't deal with basketball all day and son couldn't care, so in the evening we watched I Love You Phillip Morris, which none of us had seen, was free On Demand, and I've been in a Ewan mood this week. I liked it much better than American Pastoral!
Collapse