Cheryl came to visit on Monday, braving rain and traffic to get here, so that we could have lunch at Cava and go see Frantz with Paul. It remains excellent on a second viewing, in some ways more so after knowing where the unexpected things will appear. By the time we were finished, the rain had stopped, so we went to Brookside Gardens to see the azaleas, tulips, wisteria, turtles, geese, snakes, and amphibians (spot the hiding toad in the pics):

We came home late in the afternoon and watched some Robin of Sherwood -- apparently I am the last person in the world to figure out that the Mark Ryan on the show is also the Mark Ryan who created the fantastic Greenwood Tarot, though I can't figure out which deck was used in "The Inheritance"! Then Cheryl had to go home, so Paul and I caught up on Billions (so much ugliness) and Once Upon a Time (if only Charming and Snow could have stayed asleep!). 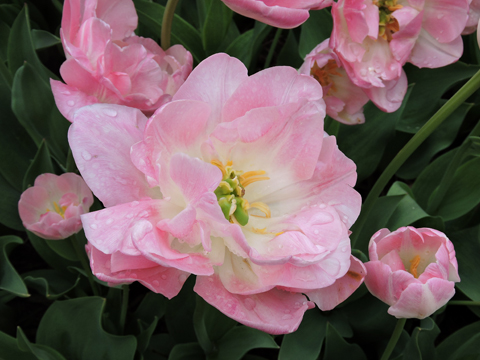