After morning rain, Thursday felt like summer -- temperature around 80, plenty of humidity -- though we still have so many dogwood and azaleas in bloom that it looked like spring. Paul had an interview, so I took Maddy to the doctor and realized driving home that if my leg kept seizing up, I wouldn't be able to hit the brake, so I called the doctor and demanded to be seen that afternoon (which meant the P.A. on that kind of notice).

Before that appointment, though, Denise came over and we discussed the world and happier thoughts while shopping at Forever 21 and playing with cats. I had not seen her in ages so that was lovely! When she left, I went to the doctor and convinced the P.A. that Advil was not doing it for me, though I am very claustrophobic and the earliest Open MRI appointment is mid-May, so I have to decide whether pain overrules fear of being crushed.

Maddy is going to California for a few days very early Friday morning, so we had Tofurkey ham with her for dinner and took her to the mall to pick up some movie posters for a friend of hers. Since everything we watch is in reruns, we put on a couple of Bones episodes (still not even through season ten and I see what people mean about how gross the murders get). Here are some photos from our April trips to Brookside Gardens, all of which involved tulips: 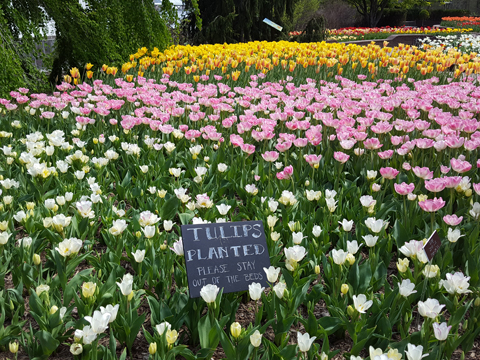