We had a crazy Monday and we're going to have a busy Wednesday, so we had a fairly quiet Tuesday doing work at home. We donated Daniel's twin bed to the Salvation Army now that we have a queen bed in that room -- for political reasons they were not my first, second, fifth, or eighth choice, but they were literally the only organization in the greater DC area willing to pick up before the end of May without charging us for the privilege of donating and we needed the bed moved before Adam finishes the semester. It rained most of the day, though we did go to Cabin John Park to take a walk when the rain turned to drizzle.

We watched The Flash, which needs to stop dragging out the Savitar storyline before I no longer care what he does, then we watched the first episode of Genius, which is a little bit too self-consciously quirky but very well acted and quite timely in its depiction of how the rise of fascism depends on both nationalism and denial of facts. Maddy is flying back from California overnight and has to be taken to work when she arrives in the morning, then we're picking up Adam from College Park again for an orientation at NIH and one more visit to the doctor, so we will run around a lot! Flowers from Mount Vernon last weekend: 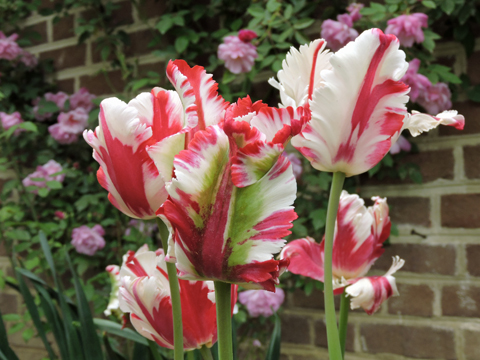