My Wednesday was all about trying to make my back feel better. The centerpiece was having an MRI at the fabulous Washington Open MRI, where instead of being trapped in a coffin scanner I was sitting in what was essentially a tight chair watching Mamma Mia (by far the best choice of the DVDs they had available though I was warned not to nod along with the music). I have a CD but the information is meaningless to me and my doctor has not yet called me back to interpret it, and when I looked at the scans I was sure I had a massive abdominal tumor so I've decided not to try to figure it out myself. I bought a heating pad that belts around my waist and can also hold a cold pack, which helps!

Since Paul has a job offer on the table, we decided to go out to Minerva for Indian food for lunch, then we stopped at Mattie Stepanek Park because I could see on Pokemon Go that it has 1) sea monster play equipment and 2) Geodudes. I did more cleaning upstairs (more comfortable than sitting to clean though I can't deal with bending to vacuum) before dinner. We watched The 100, which is welcome to keep on killing half the cast but BETTER not separate Marcus and Abby, and Designated Survivor, whose conspiracy plot is crack, before Skyping Daniel since we hadn't talked to him face to face in weeks (poor Adam has the flu). Here are some expectant geese from Brookside Gardens: 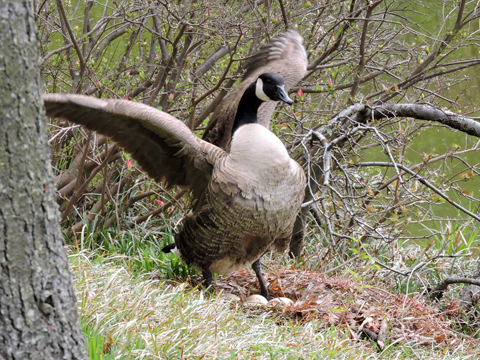