Our plan for Saturday was to meet up with Annmarie and go to the Maryland Sheep and Wool Festival where we would meet up with Karen, Heather, and a bunch of other people, then go to dinner and to see Guardians of the Galaxy, Volume 2, but my back was aching so much in the morning that I knew I would never tolerate the hour-plus drive there from our house. Since Annmarie wasn't feeling up to the drive either, we met her instead at Frying Pan Farm Park, where we mostly had the place to ourselves because it rained all afternoon, then went to have Middle Eastern food at the Sorrento Grill. The baby pigs and goats were mostly indoors but the rest of the animals didn't seem to mind the rain: 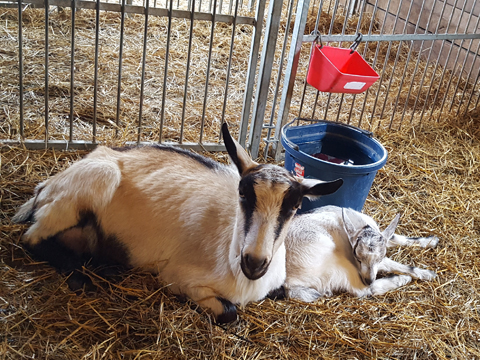 We stopped to pick up mint and simple syrup on the way home to make mint juleps for the Kentucky Derby (mine was virgin since I'm taking meds for my back). I had no opinion about which horse should win other than I always hope it's not one being doped, but I will never forget Thunder Snow taking one look at the mud and trying to buck off his rider instead of racing in it. We had veggie hot brown for dinner in honor of the Derby, then watched Doctor Who (not a great story but I love Bill and the Doctor's dynamic), Class (stop it with the daddy issues already), and Graham Norton because Goldie, Amy, Orlando, and John trump Chris Pine, though now that Graham is over we have him on being sexually harrassed.
Collapse