It rained all day Thursday so I didn't walk as much as I should have -- meaning 3+ hours -- so my back is in a lot of pain and I am very cranky. Most of the excitement of my day was stupid home projects following a trip to Michael's and The Container Store (plus a stop at Pier 1 which didn't have what I wanted and Bagel City since it was right nearby). Plus I did laundry, which was actually a pleasure as it involved walking up and down the stairs.

We had garlic couscous chicken for dinner, but didn't watch Blindspot because we're two weeks behind, though I see it's been picked up for a third season so we'll need to catch up on that. Instead we watched this week's episode of The Handmaid's Tale, which was great and distressing as they all are, then the end of the ninth season of Bones. Here are some photos from yesterday of Emmitsburg's National Shrine Grotto of Lourdes at Mount St. Mary's: 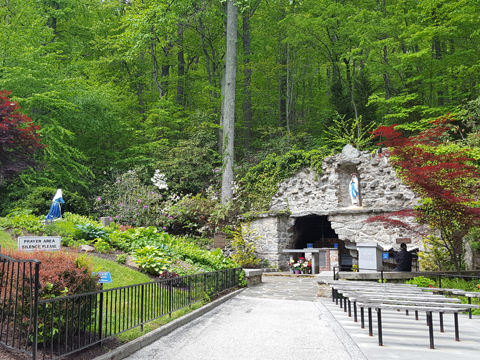