Paul had lunch plans with a former co-worker with whom he's been talking about possible future jobs, so I got him to drop me off at Washingtonian Lake, where I meant to shop and maybe get Starbucks but I got distracted because I found two families of goslings, whom I fed (fish food from the machines, nothing illegal) with the help of a couple of small children who were happy to toss food while I photographed the geese. So I only briefly made it into Charming Charlie and back to Pier 1 where the Easter stuff is now 90% off, though the adorable bunny glass etchings now on sale for $4 are impossible not to ruin while removing the styrofoam packed behind the glass -- I am very irritated I scratched up a bunny even if I got it 90% off, and I broke a little glass penguin while moving it to put up a witch ball, woe. 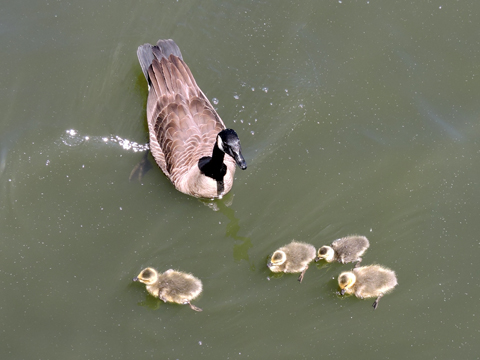 It was so gorgeous out (and forecast to be so hot the rest of the week) that after Paul came to meet me and took me home to grab a late lunch, we went to Cabin John Park to walk before a stop at Home Depot because we discovered that we'd left our electric screwdriver at older son's apartment when we moved him out to Seattle and assembled various IKEA items. When we got home we started assembling our new kitchen chairs and did various other household chores. After dinner, we watched Supergirl, which was utterly fantastic as it had Lynda Carter, Teri Hatcher, Brenda Strong, AND Calista Flockhart in addition to the usual awesome women, followed by the season finale of Once Upon a Time, which wrapped up the past six years' character arcs in a reasonably satisfying manner (two Reginas forever! Whoo!).
Collapse