Because we can't go visit Daniel for Memorial Day since I can't sit long enough to brave a plane, Daniel is coming here, yay! So I spent part of the day getting his former room, which is also now Maddy's former room, ready for him (it's much bigger than Adam's room, so we're thinking that Adam may want to sleep there for the summer as well). Then, after putting together chairs, Paul and I decided that -- since it was hot but not insanely hot the way it's supposed to be tomorrow -- we should go to Brookside Gardens while there are still fuzzy goslings instead of dinosaur goslings, and we saw those plus the usual wildlife and, unusually, a raccoon. I even got to rescue a baby turtle flipped on its back in a drain: 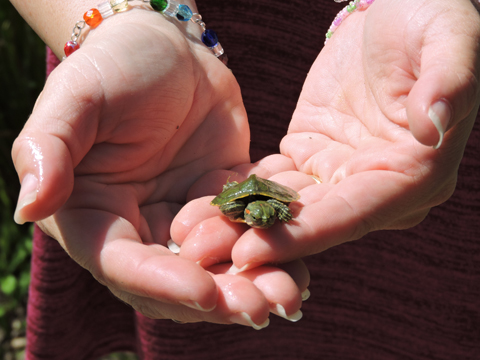 We watched The Flash, which was not any better written this week than most of this season (I can't feel anything about death on a show with tech that can make anyone look like anyone else, and though someone finally suggested putting Iris on a plane, it was dismissed with a handwave). But I'm appreciating it better now after the shitshow that is Agents of SHIELD, which I am not watching next season unless there's a shakeup in the writing staff. Things are so bad that Daisy is now my favorite character! It doesn't help either show that Genius is sandwiched in the middle; while it's tough to watch Einstein be a jerk, it is at least well written and well acted plus amazingly interesting material!
Collapse