I am still having trouble driving myself anywhere -- if I have to keep my foot on the brake for too long, my whole hip and leg cramp up, as I discovered the other day driving barely half a mile away to try to catch a Seadra so I could evolve a Kingdra -- so since Paul had work-related chores to do, I had him drop me off at the mall so I could have lunch (considered Indian but ended up at Cava again) and take a walk there (plus I bought a couple of things I needed, like a new USB cable, and a couple I did not strictly need, like perfume and a sleeveless blouse with miniature birds of paradise on it). The mall is having a spring flower exhibit with artificial topiaries and cherry blossoms:. 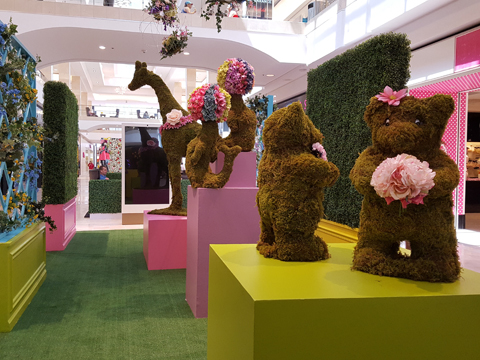 When Paul picked me up, we went briefly to the park, but the weather was beastly so we came home and I did things like hang a mirror and put up some bedroom decorations. We are still behind on Blindspot so we didn't watch it, but we watched the penultimate episode this season of The 100, which I am starting to get worried is going to kill one or the other of my favorite characters (especially since one actor's on the new Inhumans show and the characters have declared their love, which in dystopian drama usually means someone's about to die). Then we watched the cracky Designated Survivor, which gets a pass on everything because of Maggie Q, though I miss regular Virginia Madsen sightings.
Collapse