Adam is home for the summer! Well, technically he isn't home now, since he's at an all-night movie marathon with the friends with whom he's doing all-night movie marathons since they were in high school together, but he starts his NIH internship on Monday so he will be staying here when he isn't traveling to Greece for an academic conference. We picked him up in College Park late in the morning after his last exam (he doesn't have all his grades yet but it sounds like he did very well), took him to the food store to get lunch food for the week and ice cream for the party, and dropped him off at the movie marathon.

Apart from that, it was a fairly ordinary day which started much too early when one of my cats knocked over my jewelry box, requiring an hour of restoration. Friday also involved vacuuming and laundry, a visit to the neighbor's fish pond to see the frog living there for the summer, finally evolving a Kabutops, and dinner with my parents. We watched the first episode of American Gods but I have to admit it didn't grab me. The other exciting thing around here has been the surprising noisy emergence four years early of many Brood X 17-year cicadas, which is probably from warm winters but could be a sign of the End Times! 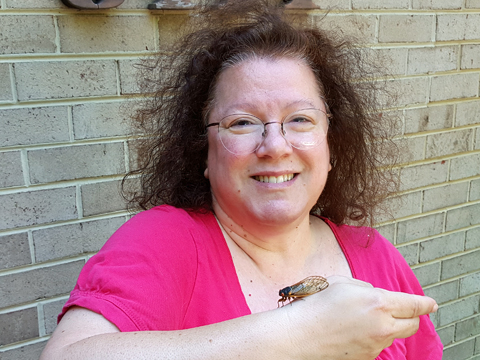