It was gloriously cool on Saturday and no cats woke me early. We picked up Adam from his movie marathon, ate lunch, and went to Kohl's because he needed some new clothes before starting his internship and I had a pile of coupons and Kohl's bucks, though I used some of that to buy myself a pair of Skechers super-bouncy flip flops because my feet are killing me from standing all day and the flip flops are spongier than any of the slippers! We also took a walk so we could see the goslings: 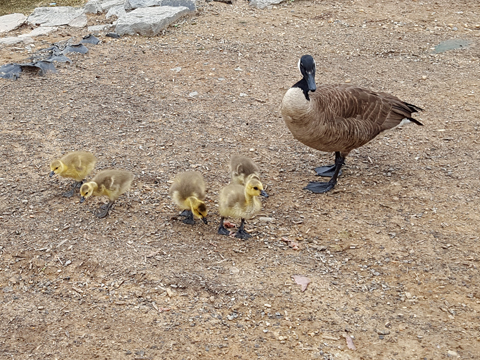 Christine came over for dinner (vegetarian crab cakes) and movie-watching, which included Beauty and the Beast (not my favorite fairy tale by a long stretch for a whole list of reasons; the cast is okay but whose bright idea was it to let Emma Thompson and not Audra McDonald sing the title song?) and an old Aussie TV video from when Hugh Jackman played Gaston. Then we saw Graham Norton and now we're on to the season finale of Saturday Night Live. I'd vote for Dwayne Johnson over many Republicans...
Collapse