The highlight of my Tuesday was seeing an orthopedist, who looked at my MRI scans, took x-rays, prodded me in various places, and concluded as my internist had that the slight protrusion of one of my discs is causing all the pain, so the good news is that there's no stenosis or herniation but the bad news is that it might take months of physical therapy and meds before the pain is gone. Given that driving for more than five minutes is painful, I'm not even sure how I'm going to get to my follow-up appointment in three weeks if PT doesn't help, but obviously this is better than finding out something is really wrong with the bone. We're sad about Roger Moore but we didn't have time for a Bond marathon because of carpooling.

Adam is very much enjoying his internship, though in typical fashion he is finding dozens of related papers and textbooks to read and doing much extra work. Because he now has all his grades for the semester, four As and one A+, after we picked him up we took him out to dinner at Grand Fusion where we had lots of wonderful tofu (orange, salt and pepper, Thai basil, satay). I missed the beginning of The Flash season finale though I'm more concerned with the end -- if That Person had died I could have lived with it, but are they switching focus entirely? -- followed by the newest Genius (uggh Albert your background and era are not excuses) and the one before, which son had missed. Local chipmunk seed gathering: 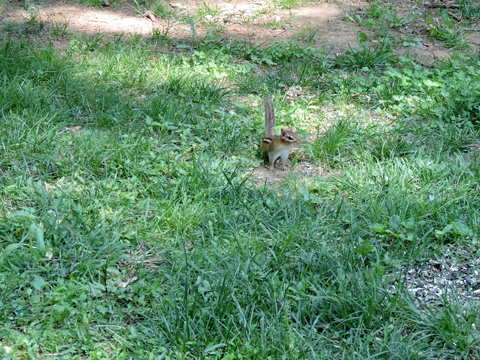