We had a quiet morning watching the Maryland women win the national lacrosse championship while Adam researched computers and flights to Greece and Daniel played with his Nintendo Switch. Then we had homemade waffles and eggs and picked up my parents to go to Fort Ward near Alexandria, which has a Civil War museum plus some of the earthworks and cannons. It was drizzly, so we then went to Alexandria with the intention of walking around the Torpedo Factory, but we found the replica Spanish ship El Galeon and many geese, ducks, and fish, so we actually spent more time out on the waterfront.

We had dinner (and several desserts) for my father's birthday at Bilbo Baggins, in an upstairs room that we had to ourselves because there was a big party in the room with the Hobbit murals. Then we came home and watched Inferno, which Daniel had not seen (nor read the book, so it was all new to him) and I have to admit that despite its flaws I still like the movie much better than the book. Now we're watching a rerun of the National Memorial Day Concert, which I always find uplifting when it's about World War II veterans and incredibly bombastic whenever modern events are mentioned. Some pics: 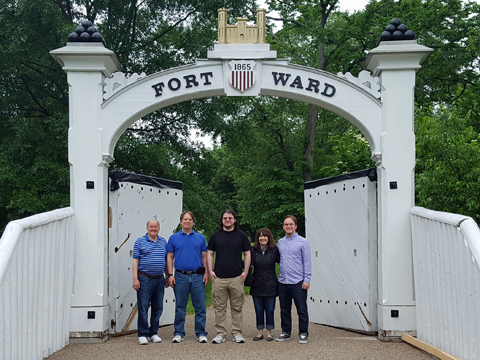