On Tuesday morning, we dropped Daniel off at Dulles, then dropped Adam off at work at NIH, and the rest of the day was spent catching up on maybe 1/3 of the things we postponed while we had both sons here. Since my day was not exciting enough to report on anything besides the fact that Adam has now ordered both a new laptop and tickets to Greece for the academic conference he will attend in June, here is the longer commentary I promised about Pirates of the Caribbean: Dead Men Tell No Tales. ( Collapse )

We picked up Adam and had spaghetti and veggie meatballs with him, then started watching the atrocious Orioles-Yankees game which thankfully we got to turn off in favor of Genius, though it was a very unhappy episode. Then we put on the beginning of the Nationals game, though now we're watching The Daily Show for our dose of sanity-saving Trump-mocking before bed. In honor of the Black Pearl, here are photos of the Gunboat Philadelphia, the Revolutionary War ship on display in the Smithsonian along with the shot that sunk it in Lake Champlain: 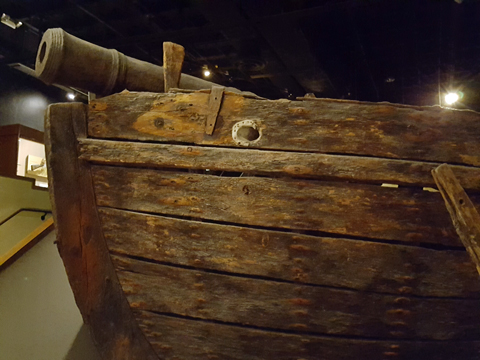