Wednesday morning I got an email reminding me that I only had till midnight to get a free photo book from Shutterfly. So I spent pretty much the entire day working on a photo book, only to have the site go down and then later tell me it couldn't open the book I'd spent untold hours on. I spent half an hour on hold waiting for customer service, only to be told that I was wrong and silly and my free book coupon didn't expire till June 7 and the site would surely be fixed by then. I looked, and sure enough that was what the saved online coupon said. I was starting to think I had gone insane when I went through my spam emails...and found yet another reminder from Shutterfly that my coupon expired at midnight on May 31. Couldn't they just have emailed everyone an extension when the site went down???

The only other thing I did of note was take a walk in Cabin John Park with Paul, where we saw lots of shiny green bugs and several fish, squirrels, chipmunks, and birds, but the frogs and toads were hiding. Niece and I had another pain in the butt situation because we'd tried to mail her a package, which was sent back as undeliverable even though she gets other mail where she's staying now, and when she tried to call the post office to find out what was going on, they put her on hold for even longer than Shutterfly had put me on hold, then hung up on her. And my back hurts, and Adam is still not home after midnight, and I absolutely loved the first episode of Still Star-Crossed which got bad ratings and probably won't be picked up! Here to make me feel better about life are some Lake Whetstone goslings from a few weeks ago: 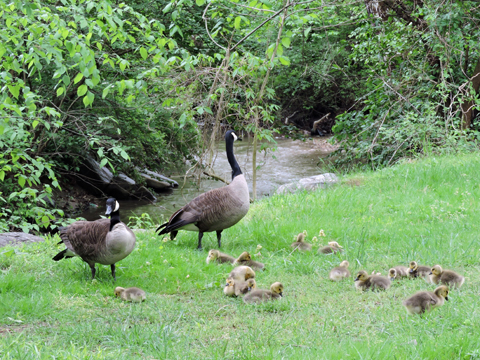