Tonight my excuse for running late is that Adam's friend Daniel Wigle just stopped by, whom he's known since elementary school (if you've been reading this journal all that time, you've seen photos of the two of them collecting caterpillars and playing soccer and doing plays and going to prom and graduating from high school). So the two of them are out somewhere and I was too distracted by the return of Orphan Black earlier to worry about blogging! We also watched Doctor Who, which started off amusingly then turned into derivative monster movie fare, and Graham Norton -- where was Gal Gadot?

Earlier in the day, Adam went kayaking while I did a bunch of organizational things on my main computer where all my photos are stored since my back actually felt okay enough to sit in a chair for an entire half hour before I needed to go take a walk around the neighborhood. When Adam got home, we had lunch and went to Homestead Farm to pick blueberries, which involved a hayride to the orchard and a trip back past the goats and chickens. We had Indian food for dinner and I did a bunch of organizing/sorting/putting away Renfaire clothing for which I had much feline help until the help (all three cats) fell asleep on the bed! 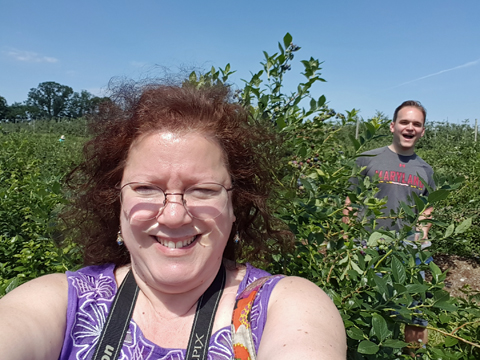