Paul took one car to work and Adam took the other to College Park, so I spent the whole day in and near the house doing chores, which was fine because there was a lot that got blown off over the weekend while I had company. The cats are out of sorts with me suddenly being the only person in the house so much of the day, so they were extremely helpful. I had the news on at first to see what was going on with the London fire, but once it was consumed by the Congressional baseball practice shooter story, I couldn't take any more.

Instead I took a walk, did my PT exercises, chatted with neighbors (we have new ones next door), things like that. Adam stayed at UMCP until late in the evening hanging out with his friends, so we had leftover pizza for dinner and watched some Bones -- we are finally up to the one episode I'd seen before we started watching from the beginning, the 200th episode Hitchcock homage which is much more fun knowing the characters. Here are some of the Homestead Farm goats whom we saw this weekend after picking blueberries: 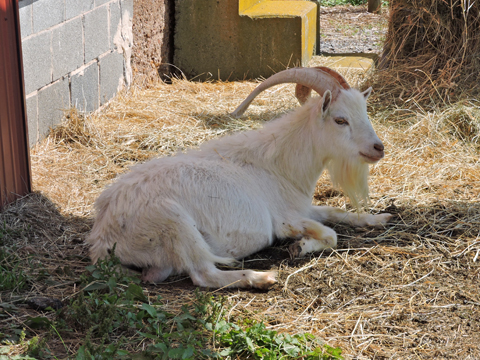