The first thing I did when I woke up on Father's Day was to check my messages from Adam, who was on a cruise around the island of Rhodes with stops at several coves to swim and a few hours in Lindos, which has an ancient acropolis and a 14th century Crusader castle. Then, after a bunch of morning chores and the Sunday paper, we picked up my parents and drove to meet Paul's parents in Thurmont at the Mountain Gate buffet, where we all had too much pie!

Since the Russian puppet was at Camp David, meaning a lot of Catoctin National Park was closed, and it was awfully hot out for walking around at the Grotto of Lourdes, we went to the Emmitsburg Antique Mall for entertainment after lunch. We didn't buy much (my mother got some Corningware, I got a carnival glass container and a couple of little glass salt cellars) but we had a good time looking at all the collectibles, household objects, and occasional objets d'art.

We managed to Skype Daniel for a few minutes (Adam was in a famous Parrot Bar and unavailable for chatting). Eventually we went our separate ways and dropped my parents off at home -- it was also their anniversary -- before coming home and watching the first three episodes of Amazon's Grateful Dead documentary miniseries Long Strange Trip, which is interesting but not as illuminating as PBS via the BBC's Sgt. Pepper's Musical Revolution! 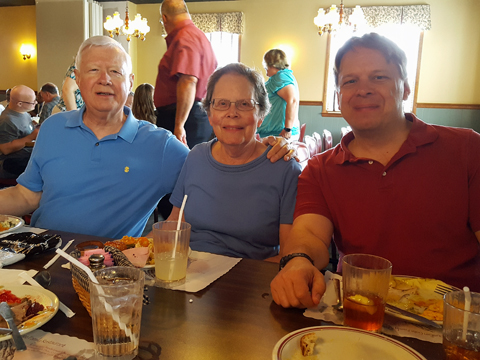