Tuesday was all chores, laundry and sorting and stuff, not really worth describing. Despite it being muggy, I did take a walk, and I met the new teeny frog living in the neighbors' fish pond that also has a slightly larger green frog, plus we now have several black squirrels in the neighborhood.

Adam went on a kayaking tour of beaches and caves in Rhodes, then rented a bike to visit the observatory, where he ate dinner and saw things 20,000 light years away. Plus, in his own words, he did some "parent-worrying rock climbing along the cliffs by the hotel where there were 6" colorful crabs."

We had veggie salisbury steak for dinner and watched the season finale of Einstein, which was great and sad though I wish there had been more explanation of how Einstein thought unified field theory should work -- later episodes had much more politics and personal life than physics. Hillwood in orchid season: 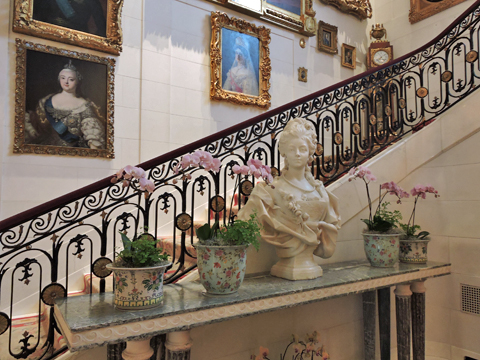