On Wednesday morning, while Adam was at the first day of the computer conference that was his excuse for going to Greece though he still got lunch overlooking the sea, Alice came over and we went to Ted's Bulletin for homemade pop tarts and milkshakes (well, and also eggs for me and bacon for her and hash browns for both of us), all of which were great. Then we walked around Washingtonian Lake, saw the geese, stopped in Charming Charlie and Kohl's, and I found out she's never seen Master and Commander so I know what we're doing next time! 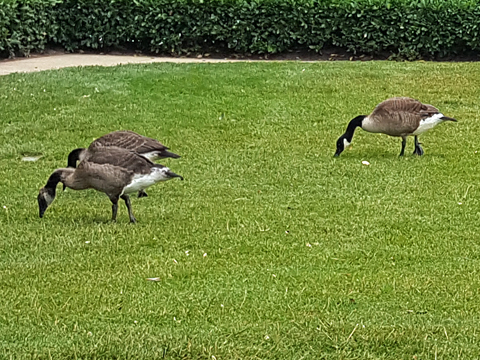 In the afternoon I did more cleaning and organizing, stopped at CVS, and did my PT exercises. We had chicken with pineapple for the summer solstice, then we watched The Zookeeper's Wife, which I really can't say that I liked -- way too many horrible things happen to people and animals alike, though it's bizarre to me how many people have an easier time with Nazis murdering Jews than with Nazis shooting camels. Chastain is pretty good but they've made her up to look much too perfect too much of the time; the zookeeper himself makes a more memorable impression.
Collapse