I had no vehicle on Monday, since Paul took one to work after dropping Adam off at NIH and the other was waiting to be seen by the Toyota dealership, so Alice and her son Avery very kindly came to visit and take me out! We went to the Original Pancake House (I had no pancakes, I had eggs and hash browns), then to Cabin John Park to walk around. Avery convinced me to try a Pokemon Go raid against a Flareon that was way too big for the two of us to take down with no one else participating, and I still need potions to heal my Omastar and Kabutops, but it was fun being in a raid with someone else! I spent the rest of my spare time finishing a Shutterfly photo book about one of our Seattle trips, no thanks to Shutterfly whose site did not want to allow me to upload photos at a reasonable speed.

When Paul and Adam returned, we went out to Giant and did chores I couldn't have done with no vehicle, had tacos for dinner, and watched the second-to-last episode of Genius since Adam missed it due to traveling. We then watched the final inning of the almost-amazing end of the Nationals-Cubs game, during which the Nats went from 5-0 to 5-4 but could not manage to win the game! From one year ago today, here are photos from the Virginia Historical Society's Gridiron Glory football exhibit, including several items belonging to Richmond's own Willie Lanier like his Super Bowl IV ring, and far too many uniforms and artifacts of the Washington Redskins (who now do their spring training in Richmond), for which I apologize but they were my team growing up and I knew my dad would appreciate this: 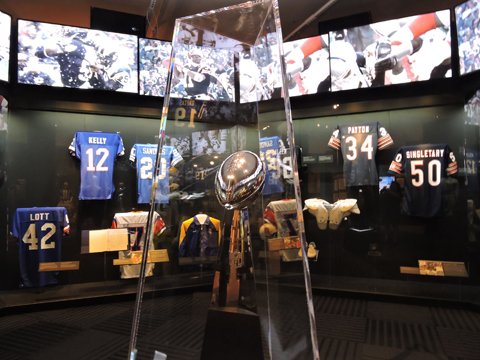