We may have gotten the van back from the dealer Tuesday night but I forgot that Adam needed it to get to College Park all day Wednesday, so I still had no transportation! The good news is, more chores got done and some things got cleaned and sorted in the kitchen that probably haven't been pulled out since we moved in, but tomorrow I am definitely getting out of the house and walking in a park! Adam had a good day; after work with his lab partners, he had dinner with one friend and hung out with some others, and tomorrow someone is picking him up from work to work on an app.

We watched part of the Nationals game after dinner, but because Cheryl and I were excited about The Greatest Showman trailer, which stars Hugh Jackman and Michelle Williams among others, we got in the mood to watch Deception since both of them are in it (along with Ewan McGregor, who is always a pleasure as a nerdy accountant). It's not a very good movie and I like the alternate ending a lot better than the theatrical one, but it's hard to look away from Hugh and the Nationals won even without us watching. From Catoctin last weekend, the Browns Farm ruins: 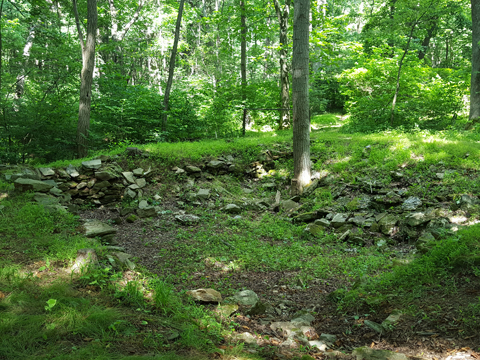