Happy birthday Canada and happy anniversary Paul! I had chores to do Friday but they were mostly enjoyable -- watching baseball while folding laundry, going to A.C. Moore to get frames for new artwork, checking Target for bathroom etageres (too wide for the space), framing and hanging things. I tried to join a big Pokemon Go raid, but when I arrived, two of the four people decided we needed more to defeat the Snorlax, so I settled for a little Quilava raid instead.

We had dinner with my parents, a bit shortened because Adam had decided five minutes before we left to go to a movie with friends (Baby Driver, which he thought was pretty good). Paul and I watched Another Country because I got in the mood for it watching other British spy-related movies this week; it's still great. Since we are going to Virginia tomorrow, here are some photos from the Monroe Museum in Fredericksburg earlier this year: 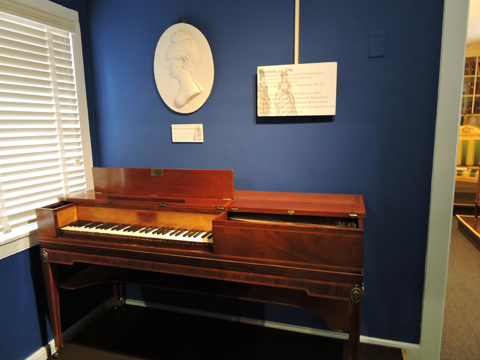