Another quickie, as we were in Richmond nearly all day and now we're watching "The Doctor Falls" since we missed it when it aired on Sunday (Orphan Black isn't On Demand yet). After breakfast with Cheryl and her cat, we all met Lin at the VMFA for Yves Saint Laurent: The Perfection of Style, which is a fantastic exhibit even for people not particularly interested in fashion. It's about popular culture, entertainment, and craftsmanship, with everything from the fashion paper dolls he designed for his sisters as a child to dozens of his dresses, suits, and accessories to clips from movies using his designs to displays on how contemporary art, world culture, and gender expectations influenced his clothing.

Then we had lunch at the fantastic Thai restaurant Sabai on its swing benches before going to Da Vinci Alive at the Science Museum of Virginia, which included some exhibits we had seen before at the Maryland Science Center and the National Geographic museum in DC, like the in-depth exploration of the Mona Lisa's evolution, plus some we had never seen before, including a massive walk-through cinematic display on multiple screens. On the way back to Cheryl's house to get our things, we took a walk at Deep Run Park, where we saw a snake, a skink, a frog, several turtles, and lots of squirrels. The traffic going home wasn't bad and Adam had fed the cats between his own social activities! 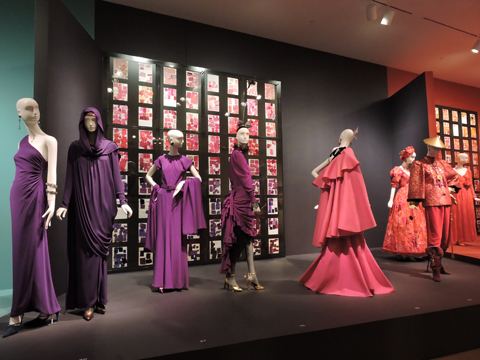