Adam worked from home on Friday, so he and I had a quiet morning working on our computers, then at lunchtime I went to dye my hair so he received a lot of cat help while I did that and ran out to catch an Ash's Pikachu while the anniversary event is going on. Adam had plans in the evening to meet his friend Robert and see Spider-Man: Homecoming, so Paul and I decided to see it too, though we ended up going to different shows because Paul and I went early to have dinner at Cava in the mall while Adam went to dinner with Robert and his parents, which took longer.

If I hadn't just seen Wonder Woman, I might have felt that this Spider-Man was my favorite superhero movie, though it's hard to separate from the long Avengers history woven through it. I thought I might resent having Tony Stark hone in on what should be Peter's movie, but I loved his role, and the other significant Avenger cameos were delightful. My brain was turned off sufficiently that I did not see the homecoming date problem coming, and although the film only squeaks a Bechdel pass, at least it's two women of color discussing academic pursuits!

When we got home we watched the end of the Nationals game, which had a delightful conclusion in the tenth inning. But speaking of academic pursuits, here are some photos from the Da Vinci Alive exhibit at the Science Museum of Virginia last weekend, including a portable bridge, a design for a revolving stage with ball bearings, Vitruvian Man, a precise replica of the Mona Lisa, a model of a bicycle, an infinite mirror room, and replicas of the Codex Forster: 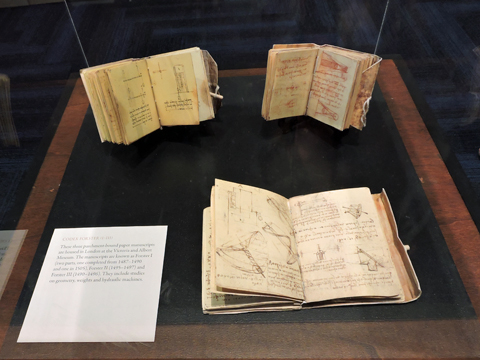