Saturday had absolutely gorgeous weather -- not insanely hot nor humid, partially overcast -- so after we all did our morning chores and Adam returned from exercising, we picked up my parents as well as Alice, whose husband and son were out of town at a cubing competition, and went to the Smithsonian Folklife Festival. Like last year's, it's not as big as it was before the museum and National Mall renovations started, but the theme was the circus and the Flying Wallendas were performing on an outdoor high-wire without harnesses or safety nets, so we got to see that and some juggling and eat gelato. The big tents at either end were pretty crowded but I was glad they didn't have animal acts or dwell on the history of human exploitation in sideshows. 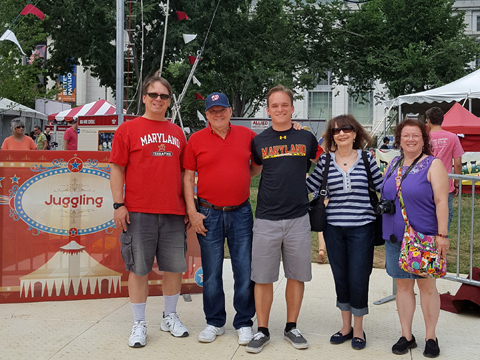 Adam wanted to go running in the evening, so we took everyone else home and waited for him for dinner. Then we and Adam watched The Promise, which was only in theaters in the U.S. for like a week but is out on DVD elsewhere already. It interested me how much the script structured the film as a Holocaust drama to make the parallels between that and the Armenian genocide unmistakable. It's very well acted -- Bale and Isaac play nicely off each other and the love triangle isn't as major in the plot as the previews suggested (Marwan Kenzari is great as a sympathetic Turk and Westworld's Angela Sarafyan plays Isaac's very likeable fiancee, the film's an easy Bechdel pass, though obviously the subject matter is very upsetting.
Collapse