My Tuesday was much less eventful than my Monday, though I got out long enough to pick up a Lisa Hunt painting I was having framed at A.C. Moore by a fellow fannish person (it is now hanging in my bedroom and looks fantastic). I spent most of the rest of the day doing household chores that included moving around other art and laundry. Adam worked from home waiting for his new driver's license that was supposed to arrive today but we're hoping I can sign for if it comes tomorrow.

We watched the start of the Orioles game, then the movie Gifted, which is well-acted and enjoyable (hard not to like a movie about a genius girl with Chris Evans, Lindsay Duncan, Octavia Spencer, and a halfway decent script), then we returned to the Orioles game in which they were trouncing Texas so that was nice! We also watched the start of the Nats game but they're on the west coast so now we're watching Colbert in Russia. From Emmitsburg's Grotto of Lourdes a few weeks ago: 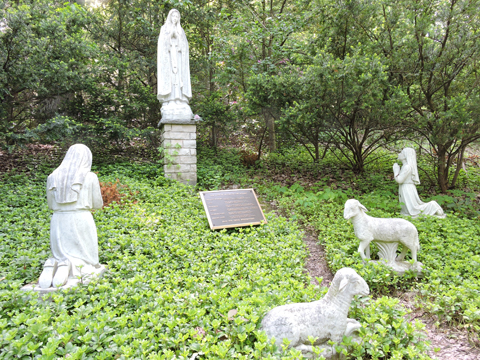