On Sunday we met my sister, her husband, and two of their daughters -- the third had to work -- at the New York Botanical Garden to see the Chihuly exhibit. It's wonderful, and I say this as someone who has seen many indoor and outdoor Chihuly installations. This one doesn't quite have the scope of the Seattle museum devoted entirely to him, but it makes fantastic use of the gardens, so for instance this is the first time we've seen one of his float boats actually floating in water rather than on a platform in an exhibit space.

We all got there later than expected, so we were ready for lunch at different times, but we sat at one of the outdoor tables and talked for a while before going our separate ways. The drive home had one hellacious stretch just past the Delaware Memorial Bridge when it poured so hard the Delaware Shakespeare Festival eventually ended up canceling its evening performance, but we made it home to son and cats who had all been fed though the latter denied it vociferously! A few Chihuly family photos, more when I'm unpacked: 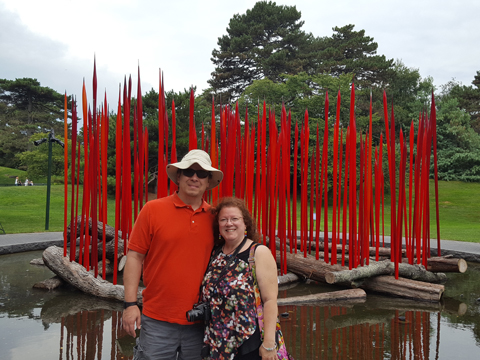