My Thursday was busy but nice. I had lunch with Karen at Lebanese Taverna, did some shopping, won two Articuno raids but failed to catch the bird both times, got some work done, dyed my hair, was chased down the basement by a cat who wanted to sit in the laundry basket, and watched the Nationals score a lot of home runs. Also, I watched some of the White House shit show, excuse me, comedy show.

Paul made cranberry chick'n for dinner. After eating, we all watched a screener of The Circle, which felt like a mediocre half a movie that forgot a third act. Here are some more photos from the Mets game last weekend, including some of the Hall of Fame plus Jackie Robinson rotunda, Flushing Meadows from the stadium, the rain in the lights, and the Home Run Apple as the Mets began their comeback: 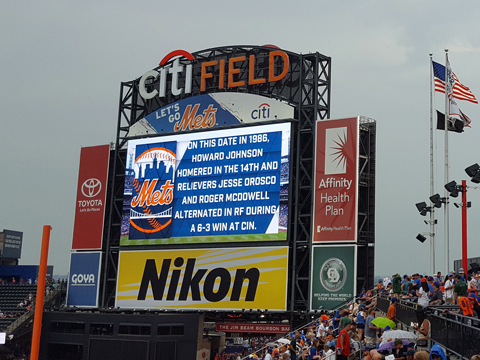