On Wednesday, Daniel went downtown to meet a friend for lunch and Alice and Avery were in the area for an appointment, so I dropped the former off at the Metro, then took the latter to the Original Pancake House by way of a Moltres raid nearby at which we both caught the Pokemon, so Avery was very happy the rest of the day! After picking up Daniel, we came back to the house and listened to Final Fantasy music until Alice had to go home.

Daniel and I caught up on the Last Week Tonight with John Oliver episodes he hadn't seen. When the rest of the family arrived home, we ordered pizza and watched King Arthur: Legend of the Sword, which was okay for a single viewing but its treatment of women is terrible and it looks too much like Sherlock Holmes; I won't miss the canceled sequels. Here is some more of the Chihuly art at the New York Botanical Garden last month: 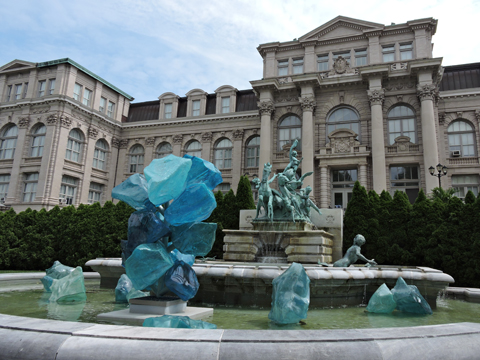