On Thursday I took Daniel to have lunch with Paul at his new office, which was also the first time I had been there. There's a pretty good cafeteria on the first floor with seating by large windows overlooking a pond with cormorants and other birds, where I had falafel and hummus (and caught a Moltres at the Pokemon gym centered on the statue in front of the building). Then Daniel and I came home and watched his copy of the Tolkien-faithful edit of The Hobbit movies, which cuts out five warg battles and dozens of stupid elf tricks, and although it loses Galadriel, it also loses a solid hour of gratuitous Smaug.

Adam had dinner plans with a friend from college who's moving away for grad school, and the rest of us had dinner with my parents. When we got home, we were in the mood for the Rankin/Bass Hobbit, so we watched that and I can now admit that in most ways I like it better than Jackson's -- okay, Thranduil and Elrond are a lot sexier played by live actors, and the animated dragon looks really cheesy, and I appreciate book-unfaithful Tauriel because it's nice to have even a poorly written female presence, but it's so much easier to watch a story that sticks with, you know, the story. Some family and cat pics from this week: 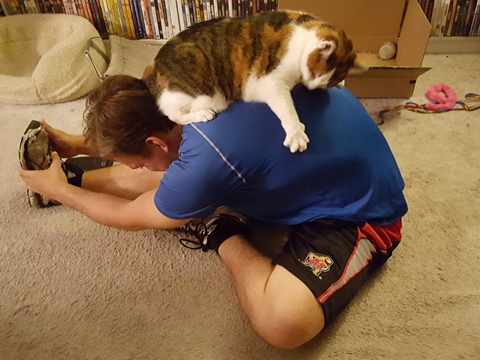