On Saturday we took Daniel to the airport to fly to San Francisco, where he's visiting friends before meeting us in Los Angeles for our niece Noelle's wedding later this month. Then we dropped Adam off at N.I.H. to work, since his research group has a big presentation next week and they needed to prepare for it. And then we headed to Brookside Gardens, which had another Pokevent like the one we went to in April except this time there were raids. We saw several frogs, many turtles, two green herons, some geese, and lots of Pokemon: 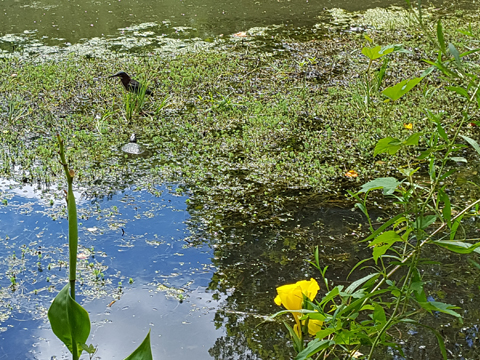 From the park, we went to Lebanese Taverna for lunch and across the street to get kitty litter (I visited Michael's next door and found they were moving the Halloween merchandise onto shelves). We stopped at Giant before finally going home for a couple of hours to feed the cats and do chores before going to pick up Adam from his internship. None of us was very hungry, so I had a piece of leftover pizza while watching the Orioles before the nail-biting penultimate episode of Orphan Black. Leave Helena's babies alone, you monsters!
Collapse