Adam worked late so many days that he didn't need to arrive until mid-morning on Wednesday, so I drove him there, then did chores and worked on an article until late afternoon, when I was summoned to assist in a Bethesda Tyranitar raid after winning a Lugia raid with a new group of people on the far side of Rockville (well worth it since we won and I caught them both). The neighbor who is house- and cat-sitting for us next week had arrived when I got back and we played with cats together for an hour.

Shutterfly had free magnets, so I made a few of those as gifts. After dinner, we all started watching the Carolina Panthers-Houston Texans preseason football game, then switched to The Story of Diana, though we realized midway through that we were going to miss the second part which is pre-empted here for the Ravens-Redskins preseason game tomorrow. Here are some more photos of the Chihuly exhibit at the New York Botanical Gardens because so many people seem to like Chihuly glass! 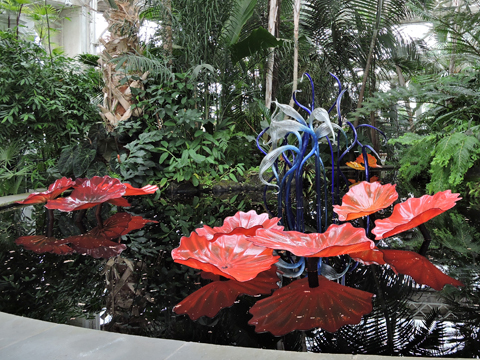 Since so many Star Trek-connected people are posting today about why we should all give 'Discovery' a chance (to such an extent that I'm wondering whether CBS offered them free access or something to inspire so much sudden loyalty), here are my feelings about the new show.

I don't care that it's a prequel. I have no strong feelings about whether or to what extent 'Enterprise' should remain canon. I don't care that the main character is rumored to be an unknown relative of a pre-existing character from the Star Trek universe. I don't care if the uniforms and tech don't look the same as the original series. I'm fine if canon is not entirely consistent, considering that canon was not entirely consistent even between TOS and TNG. I don't mind that the captain won't be the focus of the show, though the casting does make me wonder whether the captain will also be the main villain, which in this case would be all right with me. I adore Jason Isaacs. I like everyone on the cast with whose work I am familiar and have no reason to object to the casting of those with whom I'm not, since I didn't know who most of the TNG cast were when that show started to air. Were this show airing on CBS, I would be willing to give it the same chance to impress me that I gave all three reboot movies (which did not impress me at all).

I care that the new show will be airing in the U.S. on CBS All Access. This is the sole, overwhelming factor in my choice not to watch the new show. Sure, I could get it the way many people reading this will be getting it, via bootlegs from Canada or Europe, and it's even possible that I could get a friend desperate enough for a new Trek series to invite me over so I could watch legally with her. Or I could pay for it. But here's the difference between this show and all the shows that came before it: No one asked us up front to subsidize the franchise so that its network shareholders could make money. That was a happy result of the original Star Trek's success, and it was certainly a goal of its creators, but none of us as was told that we must contribute cash as well as interest to keep the show on the air.

'Discovery' isn't even like being asked to pay for a film at the box office, where we have the choice to see it opening weekend or to wait, to read reviews, to seek out spoilers if we care enough that a beloved character is rumored to die or a beloved storyline is rumored to have been reworked. With films, we make a one-time choice about whether each is something we'd like to spend our entertainment dollars to see. 'Discovery' is on a subscription service mostly carrying reruns and shows in which I have no interest. It was created specifically to make that subscription service viable, since it must compete with HBO, Showtime, Amazon, Hulu, Netflix, the new service that Disney is planning (which presumably will encompass their MCU as well), and the good old fashioned broadcast networks like the WB which is currently providing more female-powered superhero shows than I have time to watch. I get a lot more entertainment for my dollar subscribing to any of the aforementioned pay services and/or putting up with commercials.

But it's not just about me. Les Moonves has gone on the record repeatedly, not about how CBS wanted to put a new Star Trek show on the new CBS All Access channel because a pay-to-view model would allow them to make a better show without worrying about running up costs, but because Trekkies are a reliable cash cow and CBS shareholders will be thrilled with how much money we infuse into the franchise. I have two objections to this. One is the aforementioned, being asked to pay for a product with no recent track record of quality, all the while being treated not as a discerning customer but as a mindless consumer.

The other reason is more elusive. As anyone who knows me knows, Star Trek has been a big part of my life, instrumental in connecting me with some of the most important people in my life. For some of those people, Star Trek was a lifeline to a bigger world than the one in which they grew up -- it made them realize that they could become successful and valued in scientific or leadership or military jobs even though they rarely saw people like themselves doing those jobs. Many of those people would never have seen Star Trek at all if they or their families had had to pay for every episode. I certainly would not have fallen in love with it over a period of years as my father watched reruns. Putting this kind of a price tag on Star Trek doesn't make it more valuable; it diminishes the franchise and its potential impact enormously. It takes it away from belonging to its own utopian future in which ideas are freely shared and puts it solidly in an upper-middle-class marketplace.

I expect 'Discovery' to fail because I don't have any sense that the people currently working on the show really understand what Star Trek is. Oh, they're great at special effects and snappy dialogue and characters who tick off a lot of diversity checkboxes, so I'm sure the show will be at least as entertaining as the WB's DC TV universe and a lot better than some of Marvel's small screen offerings. But special effects and snappy dialogue are not what made Star Trek stay relevant to generation after generation of viewers. It had a big, generous, aspirational spirit that simply can't exist while it's nickel and diming its viewers.
Collapse